1. What are your biggest fashion obstacles?
For the most part, the only fashion obstacles I’ve faced were mental. I consider myself to be very adaptable, so I’ve never had issues finding clothes that I like or want to wear, but what in the past, what did get in the way were my judgments of myself. “I like this piece but it’s kind of out there” or, “I’m not sure I could pull something like that off” or, “Even though this piece appeals to me, it isn’t really ‘my style'”. Don’t get me wrong, it’s cool for a guy to have an idea of his style, but if a piece is calling out to you, that means it’s your style! Be bold and wear it! So about two years ago I decided to do exactly that. Since then, I’ve haven’t taken a second thought about purchasing anything that draws my attention and wearing it.

2. Where are you from and what are biggest fashion trends in your city?
I’m from Bermuda. Bermuda is a small island with a population of about 60k, so my whole country is smaller than most cities. I don’t pay much attention to trends myself, but I have noticed that there are a few styles that seem prevalent for men here. One is our traditional Bermuda style, which is the original Bermuda Shorts one of the many color varieties in which they are available, paired with a navy blazer, white button down shirt, knee high socks and dress shoes. You’ll see my take on the traditional Bermuda look in one of my featured pics. To be honest, the look is less of a trend and more classic, but I figured I’d mention it because it’s so uniquely Bermudian. 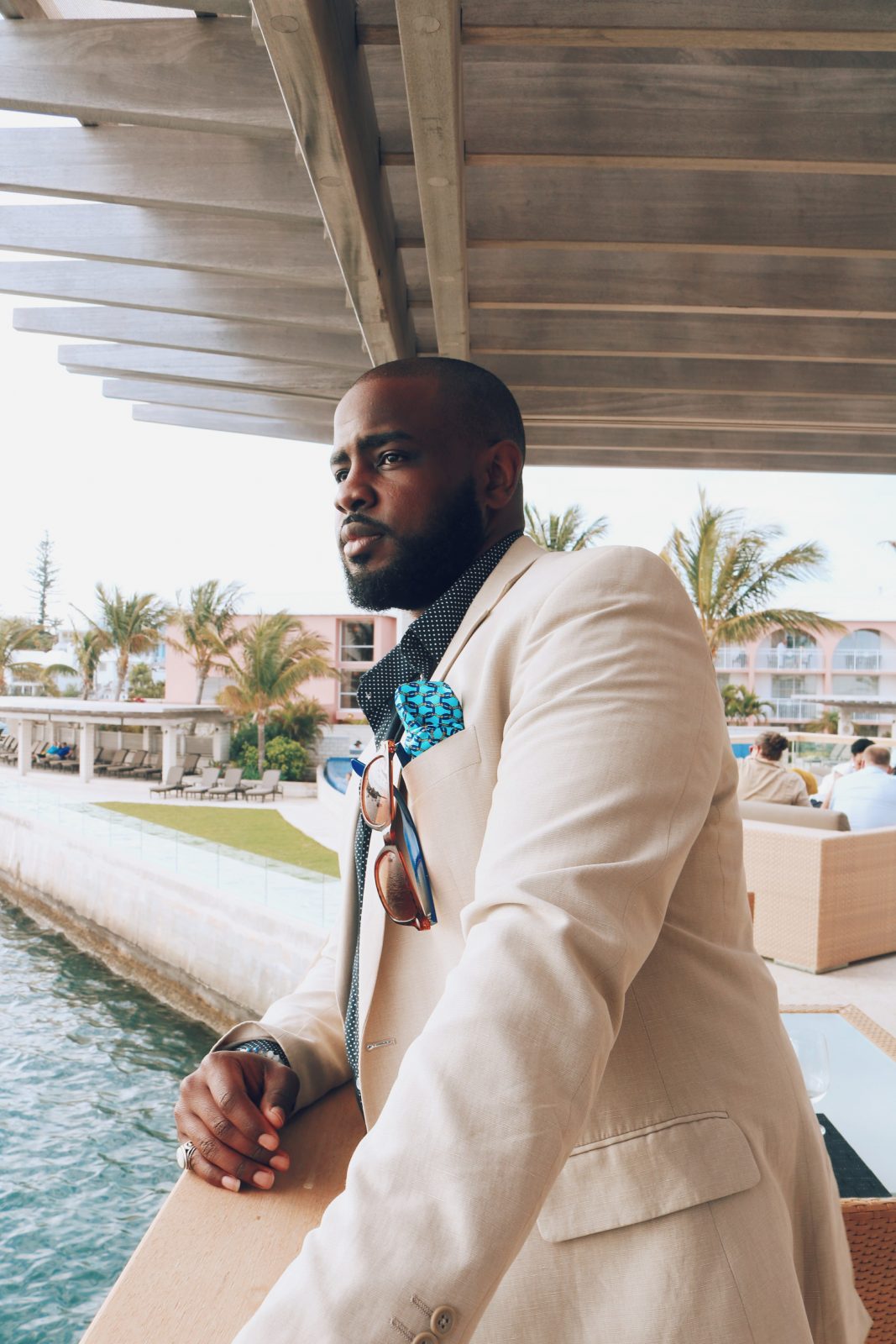 3. Tell us about your biggest fashion nightmare and if it came true do explain. (attach a picture if you can)
I don’t think I have a fashion nightmare, to be honest. One thing that has happened to me a few of times in the past that was super embarrassing was the pants rip. Oh man, I’d just hate when that would happen, and not being comfortable with my size and myself until more recently, I’d always fee extra shameful because it seemed so typical for “the fat guy” to rip his pants. Happy to say that the last time I ripped my pants (probably the funniest time) I felt almost no embarrassment at all. I was on vacation in Puerto Rico and one of my favorite pairs of cargo shorts got the gnarliest rip I have ever seen as I was hopping into the Jeep. The shorts damn near ripped in half! Needless to say I had to get into a change of pants as soon as I could.

4. What are some of your biggest style inspirations?
Nature is probably the biggest fashion inspiration for me. I love the way nature puts colors together and I often draw from that as I piece together a look. I also love traditional African fashions. The bright and beautiful prints, the dashikis and the amazing handmade jewelry are staples in my wardrobe. I like to pair them with traditional western pieces to create unexpected hybrid looks. Another thing that inspires my fashion choices is impulse. This is pretty funny really, but if I see it and like it, I usually buy it without even considering whether or not I have anything to go with it, match it and usually without the slightest idea about how to style it. This means I have to get creative when it comes time to wear the piece. That’s where the fun begins.

5.Where do you see yourself in five years and how do you see yourself accomplishing it?
I run a series of events in Bermuda called Uncorked! They are either smaller wine tastings of about 100 people or so or larger wine festivals of about 500+. The whole idea behind Uncorked! is to bring people together in order to break down social barriers. The contrast between black and white is so stark here in Bermuda and because the island is so small and so densely populated, it’s really obvious. I’d like to see that go away some day and I figured since everyone loves wine no matter their age gender or race, that it could be a good way to start a movement towards that. In five years, I’ll be hosting Uncorked! events in major world Cities starting with New York and eventually making it to places like San Juan Puerto Rico; Barcelona, Spain, and Santorini, Greece. I’m also in the early stages of writing my first book. In five years I’d have completed at least another three which are certain to be best sellers. The idea is to travel the world while writing and indulge completely in experiences. Oh, and my daughter will be starting elementary school in five years, so I’ll be preparing for that too I suppose! The future looks bright.

6.What do you feel is missing in fashion for the men of size
I don’t see fashion as missing much at all. Admittedly, sometimes it can be a little disappointing to see a pair of pant’s and know that it’s pretty much guaranteed that 38 is the biggest size (I’m usually between 38 and 40) which means that if the cut is tapered in any way, I’m pretty much out of the runnings for it. I do think more consideration can go into the way pants are made for people with a 36 waist because i just can’t imagine how some of these 38s fit anyone who actually wears a 38! Apart from that, I usually don’t know what I want until I see it, and i have a habit of easily finding things that I love for great prices – too easily. So I wouldn’t say that my wardrobe is lacking in anyway. I am usually able to find exactly what suits me.