How I Gained It: My whole life I was known as “Big Guy” or “Big Boy” because I was always the oversized kid in school and in my family. Everyone thought I needed double portions of food because of my size, which would have been okay if it was veggies and not doughnuts. In high school, my best friend (now fiancé), would push me to cut back and to slow down on the fast food and my unhealthy eating. I would try to stop myself from going to all-you-can-eat wing night at my favorite restaurant every week, but I loved the image of being “Big Rob” in high school and with my friends.
Once high school football was over, I received a scholarship to play football for Morgan State University, where I played offensive tackle at a weight of 360 pounds. I didn’t just gain the Freshman 15, I ended up gaining 60 pounds, thanks to late-night orders of fried chicken and fries.
Breaking Point: My first wake-up call was when my headaches and chest pain were so bad during my junior season of college football that I had to go to the emergency room. In the emergency room, my blood pressure was 160/120, and the nurse was surprised that I hadn’t had a stroke. She rushed to give me medicine through an IV to get my blood pressure down.
Then, when I was visiting my then-girlfriend’s mother for the first time in El Paso, Texas, I became lightheaded and weak while walking up and down the hills, and my vision became blurry. My girlfriend and her mother rushed me to the ER and my blood pressure was up to 170/110. I was at risk for a heart attack, so they admitted me for the night and prescribed me blood pressure medicine. My father has high blood pressure and is diabetic. That same year he had slipped into a coma because he wasn’t taking his health seriously. I realized my weight was holding me back from living my dream of one day playing in the NFL. I decided to make a change once I step foot off the plane. 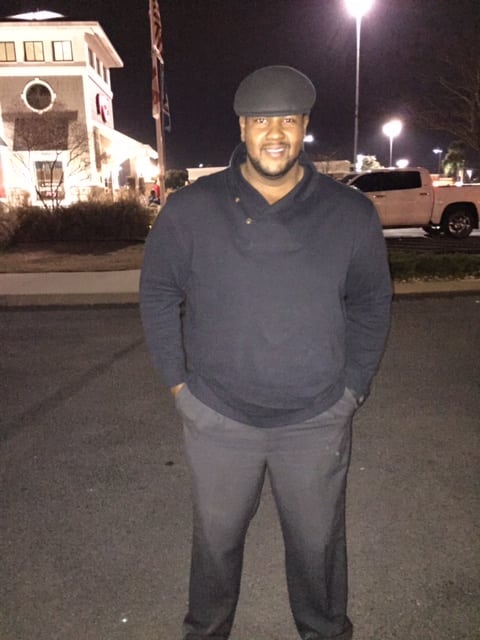 How I Lost It: The day after returning home I decided to take a jog around a park that was 1.5 miles wide. I didn’t make it the second time around because I was laid out on the grass, angry and disappointed in myself for getting to this point of being so out of shape that I couldn’t walk fast for 1.5 miles. I decided to join a gym to lift weights to help my weight loss process. I was clueless at the gym, since I had never worked out without a trainer or coach to tell me what to do. A guy at the gym named Brandon changed my life forever. He trained with me for five days a week and also did cardio with me, pushing me and always keeping me motivated when I felt like there was no progress. After a year of working out with him, I went from a size 7XL in a shirt, 62 waist, to a 3XL shirt, and a 40 or 42 waist. Now, I wear a XXL shirt and have a 40-inch waist.
Our cardio routine was four times a week and very intense. He told me I needed to start cooking my own food and trying out healthy recipes and to stay away from fast food, fried food and sweets. I started to cook my meals and eat six times a day. I also started drinking two gallons of water a day.
Now, I have started a fitness business called Transformationfitnation. I share my story and those of others who had to fight through adversity to change their lives. Now, I can go hiking, mountain climbing and enjoy traveling. Before, when I would fly on planes, I would have to buy first class or two seats because of my size, and it was becoming costly. Now married and becoming a new father to healthy baby boy I am more motivated than ever to accomplish new goals, one being a bodybuilder and competing in the summer of 2018.